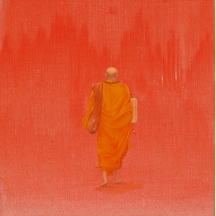 Born in 1973 in Hanoi, Phuoc graduated from the Hanoi Fine Art Institute in 1997.  The write up provided by the gallery further described his works as follows:

“Inspired by his travels to Buddhist cultures, Phuoc depicts the devotion and discipline of Buddhist monks in a very appealing artistic style. Phuoc’s art focusses on the iconic image of a monk or a group of monks, viewed from the back, traveling onwards in a purposeful journey (emphasis mine). The backgrounds of his works vary from pagodas of temples to tree tops and even deep hue of reddish orange.”

“The simplicity and two dimensionality of the backgrounds only serve to contrast the detail of the monks robes, as every fold and shade is in sharp focus.” 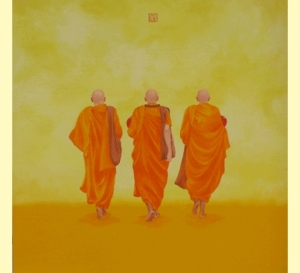 “Purposeful journey”  “Search of fulfillment” strike a chord as you absorb the beauty of these paintings.

Let me now relate it with the teachings on Vedanta by Swami Dayananda Saraswati on the purpose of Self Knowledge.

I quote from his works:

“All human purposefulness can be classified under four headings. The collective Sankskrit name for these four headings is purusartha, from purusa, human being and artha purpose, that for which a human being longs and struggles. They are dharma, artha, kama and moksa”

“Moksa, liberation, is the goal of discovering freedom from the hands of time; freedom from change, age, death, grief, and loss; escape from a never ending sense of inadequacy and incompleteness from all forms of limitations, the desire to be rid of desire itself.”

“Any human seeking is basically a search for liberation. However, most people seek in places where liberation is not available. The usual seekers have not singled out that freedom itself is the fundamental human end,but instead keep their vision sighted on a house, a job, a vacation, a marriage or whatever represents a step toward completeness for them. Among these usual strugglers some single out moksa as their goal when have discovered that achievements do not bring lasting satisfaction and perhaps have chanced upon some book or other writing that discusses liberation” 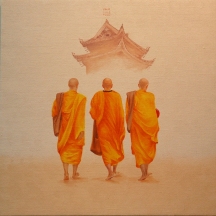 “Whatever the source, be it a book, a traveling swami, an informed friend, when the information about moksa hits ready ears, the search for information about the means to moms begins. This search itself can lead a seeker over a lot of ground form yoga to therapy, from guru to jury, in a process of negation and natural selection until the goal of moksa, gains definition and direction; and the means to it, which is knowledge alone becomes clear.”

“Why is knowledge the only means to freedom, moksa? It is because freedom sought is limitlessness itself, that choiceless human goal underlying all other human struggles for limited ends. Limitlessness is not something that can be created or produced. It either is or it is not. Limitlessness, by definition can never be the end product of a process of becoming. An endless series of limited things will not constitute limitlessness.”

“Often as I look around I judge myself to be bound, limited, inadequate. At the same time there is that love for freedom that in occasional moments of joy or insight seems to be fulfilled as fact, contradicting all my experiences of inadequacy. Thus even though my usual experience is that of being limited, on the basis of my innate nature to be free, backed by intimations that freedom may be my nature, I am led to search for knowledge of the truth of myself to discover whether or not I am that being I want to be. If the freedom I seek is an accomplished fact, my failure to appreciate that fact can only be due to ignorance; and if my only problem is one of ignorance, search for liberation becomes a search for knowledge that will dispel my ignorance that keeps me from knowing myself as I am.” 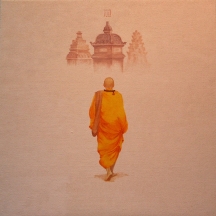 If you notice the paintings once again and their order of sequence. The first two paintings depict monks walking towards something that is not yet seen. This could be interpreted as the initial desire for liberation i.e. Moksa.  The second two paintings depict the monks walking towards a monastery a seat of learning or place where the guru who is an embodiment of knowledge resides;  this could then be interpreted as a realisation that it is only knowledge that sets you truly free or a jijnasu. Across all the paintings you can see the purposefulness in their strides implying an intensity for liberation, which is mumuksutva.