Most of you must have seen and enjoyed “Inside Out’. A truly path breaking film featuring the emotions of a 11 year old and her struggle in adjusting to a new city showcased from inside her mind. Apart from the 5 basic emotions, the film also covers various other aspects of our minds such as different forms of memory, sub consciousness, personality traits, train of thoughts etc. Here is a trailer clip to refresh your memory.

My first reaction after watching the movie was that it would be a useful way of examining the journey of a spiritual seeker using Vedantic concepts. The travails one faces in leading a Dharmic life pursuing Artha and Kama and slow emergence of a quest for liberation and its consequential pursuit, first in the preparatory phase of developing dispassion, discrimination, discipline and desire for liberation, then in finding the right guru, entering the phase of sravanamam and mananam, the doubts being clarified and the final understanding and staying in that understanding. This typical journey of a seeker has so many obstacles and consequently so many possibilities for narrating a story. A seekers’ understanding of Gunas, Vasanas, Buddhi, Manas, Atman, Panchakosha, Sharira Traiyam  can all be pictured from inside his mind through various incidents in his life.

This what I tweeted immediately after I watched the movie. 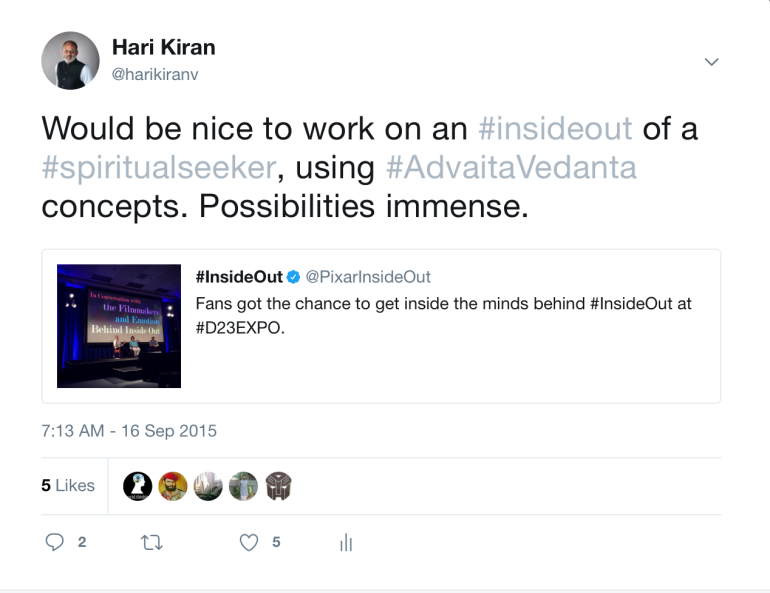 Another line of examination would be to approach Gita from the inside of Arjuna’s mind. What was going on in his mind when he was listening to Krishna? What we know is that it is a dialogue between Krishna and Arjuna covering 700 verses of which probably 60 -80 verses would be by Arjuna and balance by Krishna. Before Arjuna asked a question or sought a clarification from Krishna, what was going on in his mind ? After all a question is a final articulation of a doubt. Before he even formulates a question what are other doubts that rise in his mind, which he himself discards? How did he understand the various lessons being taught? What were the lessons he understood easily and which one took time? We know at the end of the discourse he picked up the weapons to fight the battle but there were so many lessons taught by Krishna that went beyond the immediacy of the battle. How did he  digest and retain those lessons amidst the battlefield ? After all Mananam (reflection) is an important facet of a spiritual journey. One continues to get doubts even after Shravanam (listening to a Guru). So what were the doubts he still had during the battle which he resolved subsequently ?Which were the ones unresolved ?

As one can see examining the Gita from the inside Arjuna’s mind can be a complete exercise in understanding the entire body of wisdom outlined in the Upanishads as Gita itself is a “executive summary” of the Upanishads.

‘Inside Seeker’ or “Inside Arjuna” are two stories that can be developed explaining Vedanta in an interesting manner and hopefully someday filmed too. Any takers?

INFLUENCE OF UPANISHADS ON INSIDE OUT ?

A month after I saw the film, I suddenly remembered that conversations within the mind was originally a Upanishadic idea found in Chandogya and Brihadaranyaka Upanishads. This is what I tweeted then.

I did some research into the background of the director to see if he had any Indian influence. Except for the fact that he studied philosophy during his under graduation, I could not find any.

Meanwhile I could find the following two accusations of plagiarism.